Born to Run: The Book that Inspired the Barefoot Running Movement

In one sense, barefoot running is nothing new. Throughout our long history, humans have often run this way, and certain groups of people still habitually do so today. Most of us at least ran around barefoot as kids.

But as we grow up, shoes become an inevitable part of daily life. Walking or running without them in the modern world is rare. Far from going barefoot, the running world in recent decades seemed to be going toward ever-more-sophisticated running shoes that were a long way from anything our ancestors would have recognized.

Then a funny thing happened. Christopher McDougall published Born to Run and created intense interest in getting back to the oldest form of running – without any footwear at all.

So what did McDougall have to say that inspired so many to ditch their traditional footwear? This article will describe the main lesson in his book and offer some advice about getting started in barefoot running (in case you get inspired, too).

The Question that Started McDougall’s Journey

Christopher McDougall was a journalist used to a very physical lifestyle. He wrote about extreme sports and even served as a war correspondent. As he got a bit older, though, he found that his body was starting to show signs of wear. He developed significant foot pain while running and went to see his doctor about it.

As he relates in his book, he had a simple question: “How come my foot hurts?”

The doctor told him running is hard on the body — especially a big body like his. (He is six foot four inches tall and, at the time, weighed two hundred thirty pounds.) He would need to stop or be prepared for more pain and injury in the future. He got a second opinion. Same answer.

This reflected conventional wisdom at the time: Running subjects the human body to stresses that it isn’t designed to handle long-term. The statistics seemed to support this view. As many as eight out of ten runners are injured in a given year.

But McDougall was left wondering. He reasoned that all kinds of other animals seemed to be able to run without chronic injuries; why not humans? A chance discovery would lead to the answer.

Running Secrets of the Tarahumara

While working on a story in Mexico, he came across a magazine article about a remote tribe, the Tarahumara, that caught his attention. According to the report, this indigenous group in Mexico possessed several unusual characteristics.

For one thing, they were exceptionally healthy. They were also peaceful and enjoyed high levels of happiness. What especially intrigued McDougall, however, was that they were known for the ability to run exceptionally long distances — sometimes more than 100 miles. As he investigated them further, he was surprised to find out they didn’t have any special training regimen and apparently didn’t even bother to warm up or stretch before a run.

Yet they didn’t struggle with the kinds of injuries we associate with running. Why not?

Footwear Makes all the Difference

McDougall eventually was able to spend time with the Tarahumara and even trained with them to run an ultramarathon of fifty miles. After his epic adventure, he came to the conclusion that one of the key things that made them distinct as runners was what they wore on their feet.

The Tarahumara usually run wearing only very thin and flexible sandals, called huaraches. This footwear allows their feet to move much like they would if they had nothing on their feet at all. Why is this such a big deal?

McDougall notes that humans evolved to be exceptionally good runners (hence the title, Born to Run). We have several biological advantages over other mammals in this respect. The most important is our ability to regulate heat by sweating. Other animals, which are covered in fur, do so by panting.

But you can’t pant and run at the same time. So even though a deer, for instance, can spring much faster than a human, it cannot run for very long without having to take a break. In contrast, humans can run without ceasing for hours. Traditionally, the Tarahumara used this advantage for hunting. They simply ran deer to death.

The bones and muscles of our feet and legs developed to support this kind of long-distance running and are well-suited to the task. We are natural born runners. The creation of modern running shoes in the 1970s, however, disrupted this finely-tuned system.

The thick padding, elevated heel, and arch support actually changed our running style. For instance, those used to wearing modern running shoes overwhelmingly hit the ground heel first when running, in contrast to the fore-foot or mid-foot strike common for those used to running barefoot.

McDougall wondered if common running injuries — like plantar fasciitis, shin splints, and knee pain — were the result of poor form encouraged by modern running shoes. He even discovered that some of the world’s greatest distance runners ran barefoot or wore minimal shoes. In his own case, he found switching to shoes with minimal padding and without the elevated heel was a crucial ingredient to achieving a more natural running form. His foot pain resolved and has not returned.

When McDougall published Born to Run in 2009, it touched a nerve. Many people sensed something was wrong and were frustrated with their inability to run without pain. A key idea from the book, that running more naturally can help avoid injury, inspired many runners to experiment with barefoot running. 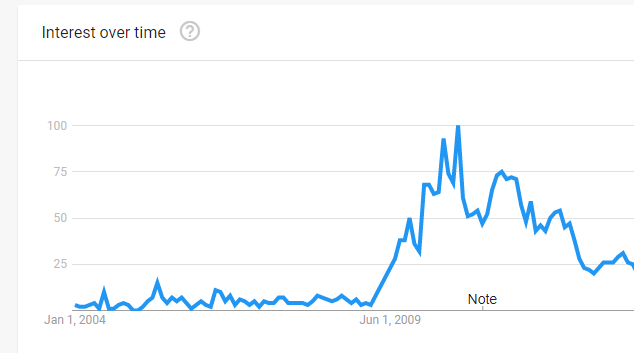 A screenshot from Google Trends using the term “barefoot running.”

But many running surfaces aren’t safe for bare feet. The Tarahumara themselves live in a rocky environment and wear thin sandals to protect their feet. So companies began to make shoes that would allow for running as close to barefoot as possible while providing protection.

This kind of footwear, called “barefoot shoes” or “minimalist shoes,” has a thin, flexible sole to allow the whole foot to bend and move naturally. It also avoids elevating the heel, using a “zero-drop” sole instead with the same thickness from front to back. It is able to protect the foot while also promoting correct running form to prevent injuries.

How to Start Running Barefoot

After reading the book Born to Run, many people get inspired to try out a more natural running and experiment with running barefoot. One of the things we’ve learned since the early days of the barefoot running movement is that it is important to start slowly and pay attention to form. If you usually wear shoes, you’re likely to have a running style that can cause problems with bare feet or minimalist shoes.

For instance, you’re probably used to landing heel first. Modern, expensive running shoes have thick padding to blunt the force of this impact. Without that padding, your heel will feel the full force of it. If you take off your shoes (or put on a pair of minimalist shoes) without changing your old form, you’re probably only going to make things worse.

So take it slowly and listen to the feedback your body gives you. The barefoot style of running feels significantly different. With time and experimentation, you’ll find your way to the proper form for you. Hopefully, like Christopher McDougall, you’ll enjoy a new freedom of pain-free running for years to come.

Find out more about barefoot running and barefoot shoes here on Barefoot Alliance. You can get the Born to Run book (which is apparently also going to be a movie) on Amazon here.