Is Running Barefoot Good for You?

Our ancestors would find this a surprising question. As near as we can tell, human beings have been running without shoes for most of our history. While we can’t survey prehistoric humans to see whether they longed for shoes, there are still places around the globe where going unshod is relatively common. There have even been world-record-setting athletes who ran barefoot, like Abede Bikila, who won a gold medal in 1960.

And yet, once we get used to something it can be hard to imagine anything different. For most of us, from the time we could walk, we usually had footwear on our feet. Especially when it comes to running, we’re surrounded by a whole industry built on the premise that this activity requires specialized, expensive shoes. Whether walking or running, most people are just used to wearing shoes.

With the publication of Christopher McDougall’s book Born to Run in 2009, thousands of readers encountered the idea that maybe there was something we’re missing with our modern running shoes. Perhaps running barefoot — or near to it — is actually better for us. The book kickstarted a movement to recapture a more natural style of running.

If you’re reading this, it is probably safe to assume you’ve encountered some of these ideas and are wondering if barefoot running is really as great as its devotees claim. In this article, we’ll take a look at the case for barefoot running and consider what the research has to say. We’ll even give you some tips about how to get started if you find yourself convinced (or at least intrigued).

What was it that Christopher McDougall had to say that inspired so many people to kick off their running shoes? In his book, he tells the story of how he was an avid runner but struggled with injuries. His physical therapist told him that people just aren’t made to run and he should face the fact that injuries to his knees and feet go with the territory.

This sounded a bit odd to him since lots of other species on this planet seem to run just fine without constantly injuring themselves. But he may have become just another person who used to run if it weren’t for an assignment he had in Mexico. As a journalist, he was sent there to report on a story when he happened to read something about an obscure tribe, the Tarahumara, who were famed for extreme long-distance running. Intrigued, he decided to visit the tribe to find out what he could about how they ran.

His observations during his time with the Tarahumara were a revelation to him. He found that, despite the distances they ran and their complete lack of training, running injuries were rare. Their secret, he came to believe, was in how they ran. In particular, they wear the most minimal footwear and have a form and pace quite different from what McDougall was used to.

He drew two conclusions from his experience. First, running without pain and injury has everything to do with the proper form. Second, proper form has a lot to do with what you wear on your feet. He speculated that it is the minimal footwear the Tarahumara use that encourages a more natural running form. In contrast to the thick-soled traditional running shoes, we’re used to, the Tarahumara run in very thin sandals with no padding whatsoever. It is as close as you can get to barefoot while still having some protection for the bottoms of your feet.

This idea that traditional running shoes might be causing us to run in an unnatural way actually leads to injuries quickly spreading in the running community. An interest in and desire to try out barefoot running exploded.

The Potential Benefits of Running Barefoot

One of the most important is that a central claim McDougall makes in his book is right: there is a relationship between what you’re used to wearing on your feet and the form you take when running. Those who are used to running in cushioned running shoes and those who are accustomed to running barefoot run differently.

How so? For one, the way the foot hits the ground is different. Those who run barefoot tend to use a forefoot strike while those who run in shoes favor a heel strike. Researchers have also found that barefoot runners tend to have shorter and faster strides.

Combined, these differences make for a much gentler landing for shoeless runners, even on hard surfaces. The force of the heel striking the ground puts greater stress on bones and joints than a forefoot strike and the longer stride exacerbates the effect.

The researchers who observed these differences hypothesized that the gentler form of running barefoot would lead to fewer repetitive-stress injuries associated with exercise. Subsequent research has given some support to this view, with two studies finding lower rates of injury with barefoot running (here and here).

So one benefit that may result from barefoot running is fewer knee injuries and other problems with our feet and ankles that result from the repetitive stress of impact. The authors of many of these studies emphasize, however, that our data so far is preliminary and limited. More research is needed.

Finally, running barefoot has been found to be more efficient than running with shoes in terms of energy and oxygen demands. The difference doesn’t appear to be large, but it could make an impact for distance runners.

What about Running in Minimalist Shoes?

There is one obvious and potentially serious drawback to running barefoot: not all surfaces are safe or comfortable for bare feet. It can be quite painful to put your foot down on sharp objects or stones. The reality is, that our feet need protection. As we mentioned earlier, not even the Tarahumara ran completely barefoot.

Fortunately, a number of companies have created “barefoot shoes” to meet this need. A barefoot, or minimalist, the shoe is designed to give you an experience as close as possible to barefoot. It will have a thin sole so you can maintain a feel for the ground; it will also avoid the rise from toe to heel found in a typical shoe; finally, it will give your toes room to move naturally by including a wide toe box.

Are barefoot shoes good for your feet? With minimalist running shoes, you will get a lot of the same health benefits you would get from wearing nothing no footwear. You’ll also be protected from being injured by anything sharp you come across on your run. 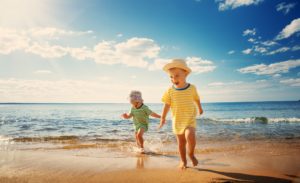 How Can You Get Started in Barefoot Running?

After reading about the health advantages of barefoot running, maybe you’re inspired to try it out. How should you begin?

The short answer is slowly. Some runners struggle making the transition and even run into injuries like Achilles tendinitis because they are essentially running the same way, just without shoes. Remember that form while you exercise is crucial. You need to let your body adjust to a new way of running barefoot that gets away from a heel-first, long stride you’re probably used to.

You’re also going to be placing more demands on the muscles of your arch and other parts of your feet than you usually do. These will take time to strengthen.

The best thing to do is begin the first week with only running barefoot for a short distance and then gradually increasing to longer distances. If you push yourself too quickly, you’ll risk injury. Pain is actually a useful guide; if it hurts, you’re doing it wrong or doing too much.

You will also probably want to invest in a good pair of minimalist shoes. (We’re big fans of Xero Shoes.) The right shoe will help you find that balance between maintaining a natural running experience and protecting your feet.

If you do decide to launch out into the world of barefoot running, good luck! We’re confident you will find new pleasure as a runner as you rediscover the way our ancestors used to do it. Feel free to look around this site for more on barefoot running and barefoot shoes.